Just pulled the trigger last Friday on my first side by side, and my first Honda product. Super excited to see where this takes me! I'm not sure how out of hand and expensive this hobby will get so I don't know how "crazy" this build will be. I am not expecting anything too crazy but only time will tell. I'm hoping to use this as a way to document the changes I make along the way and also use it as a way to connect with the community! Progress may be slow, and super random at times, but I am hoping to be able to look back at where it started.

Didn't waste any time putting her to work, got about 25 miles on the Pioneer the first weekend home and I'm already in love. My last "work horse" was a 1997 Yamaha Moto 4 that topped out at about 30 mph so this is a huge upgrade lol. Ready for the fun too begin, lets see where this takes me! Welcome to the forum and the addiction.
Reactions: CumminsPusher and ABischoff

Once I got my Pioneer home and the extreme excitement settled I started to notice some issues. The only thing so far is cosmetic, but it's pretty noticeable. On the hood of my machine the red plastic appear to be discolored almost as if the plastic was not fully mixed. In pictures it is hard to tell but you can still see it. It's much more noticeable in person. The next issues is with the 1000 EPS tag on the hood. The tags "clear coat" is all cracked and wearing away. 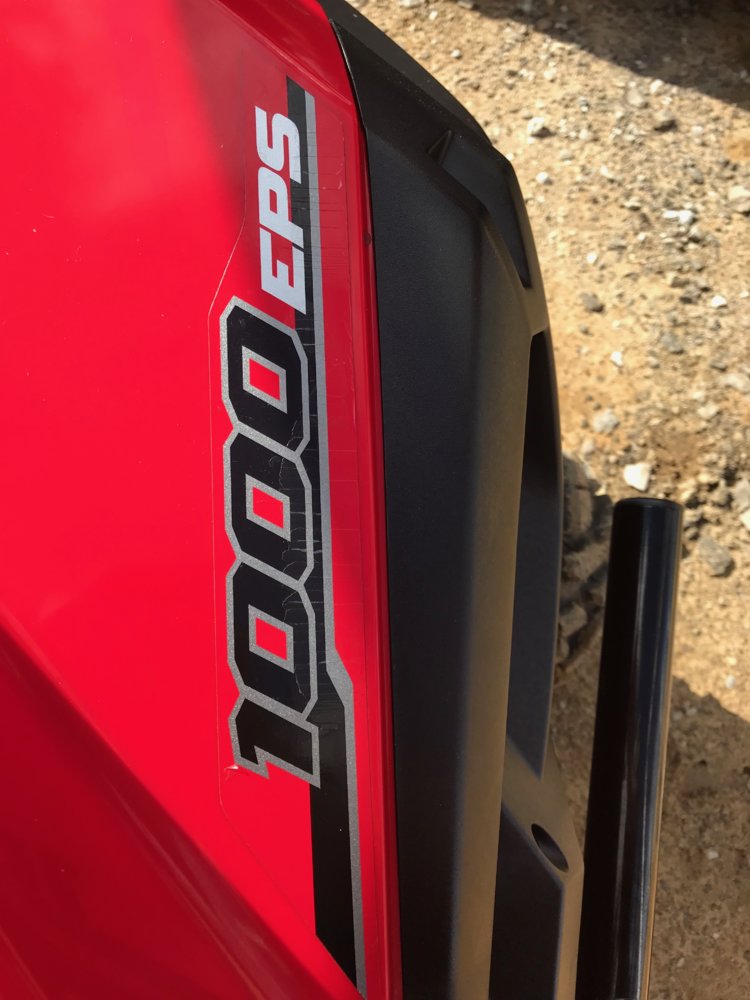 With this being a brand new machine I am a little disappointed in this. Reaching out to my dealer today. Anyone else have this issues? Thinking now might be a good time to swap to gray panels
Reactions: TripleB

Hoods are cheap if they won’t replace it but I’m sure they will. Could swap color for some contrast too Called up the dealership yesterday and they said they would replace it no questions asked, super happy with how that went.
Reactions: Adam490 and CumminsPusher

Glad to hear and good for Honda !

The first few parts started rolling in earlier this week. I have a tripped planned this weekend to an off-road park near me and that kind of lit a fire under my ass to get going. Also I put about 55 miles on her this last weekend just riding around locally with some friends. In reference to my earlier post about getting the discolored plastics replaced, I ended up getting credited for the panels instead of replacing them. I did this because I am hoping to swap to metallic silver panels in the near future so having the money will just let me do a straight swap. When I do this I should have some like new red panels for sale or trade if anyone would need replacements.
Did some yard work and took advantage of the dump bed and luckily had some help from my partner in crime when installing all of this. Without some of these mods it was pretty easy to see what needed to happen first. First thing I added was a cheap rear-view mirror from amazon. From what I can tell it is pretty well build for the price ($16). The only issue is that the listing says that the mounts are for 1.75" tube but these didn't quite clamp around all the way, shouldn't be a problem though. The next thing on the list was a radio and some speakers. I have been pretty indecisive regarding which speaker to go with and instead of dropping $3-500 on a speaker setup I opted to just buy a $100 Bluetooth speaker and a mount for it. The speaker is an Altec Lansing Lifejacket Jolt ($100) and the mount is an adjustable roll bar mount ($10). I had this with me out riding and going 55 with no windshield the speaker was still plenty loud. So once I get a windshield and a roof this thing should do the trick nicely. The nice thing about this setup is I can easily unclamp it and take it out on the river with me or to the campfire. Next I needed a safety flag for my trip this weekend and I opted for a super cheap option. I was kind of in a hurry to get this ready so the cheap option was the best option. It is a bike flag that I picked up from Walmart for around $5 and it even came with a mount. All I needed to mount it was a longer bolt for the safety net mount that I used. Took about 30 seconds and should do the trick fine for now. Now the big one was a SATV Flip-Up Windshield. This install went fairly smooth (awful instructions though...) but I did have a couple of damaged parts. I ended up fixing them myself and reached out to SATV to send some replacement parts to get the issues resolved properly. I do a lot of driving from field to field during the farming season so a windshield for me was a must. Next on the list is a roof and some lights. I still need to decide what route to go with the roof, but I am leaning towards and OEM hardtop. I can get this from my dealer for $500 out the door so I think that is a pretty good deal. With winter coming this should hopefully be happening soon. As far as lights I am thinking a smaller light bar on the front bumper and a pod in the rear for a back up light. Not sure how soon that will happen but it will happen at some point. Looking forward to riding this weekend with some good friends. We've got 3 side by sides going and 4 atv so it should be a fun day!

Lost in the hills