Map includes my revisions to show bridge locations, bridge widths, and the by-pass for 2 bridges that is not along side or as obvious. Those 2 by-passes are off the beaten path, not easily seen. 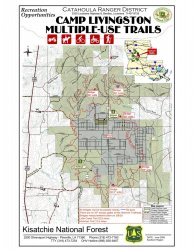 How does it compare to Sandstone? We’re thinking about checking it out when it reopens.

It’s rougher with a LOT of tight turns. But it’s still better than Claiborne. Lot more roots than sandstone but not as bad as Claiborne. Not as fast as sandstone either. Usually not much traffic there either unless other trails are closed. We went early in early May when it was the only trail open and there was quite a crowd of campers. I like it ok. My wife does not like all the right turns. Easy to get lost at that circle area on map near north trail head too.
Reactions: Peter_72
You must log in or register to reply here.
Share:
Facebook Twitter Reddit Pinterest Tumblr WhatsApp Email Link
BOX2
box3
Top Bottom