I own a 2016 700-4, I have owned it for a year and bought it with about 100 hours on it for a great price. Other than getting used to the chatter in the rear axles (solved by heavily greasing the splines) it has needed nothing. After about 4 weeks of ownership I noticed that the camber on the passenger side is about 1.25” in at the top of the tire. I then noticed the mounting brackets welded to the frame for the upper control arm had rust showing through the paint. The paint appeared to be cracked like when you bend painted metal. I wire wheeled the welds and they are not cracked but my only conclusion is that somehow the machine took a hit in the front end even though the frame or control arm is not visibly bent. The machine tracks straight and is not wearing tires. Has anybody had any experience with this? Anybody know of a company that makes adjustable control arms for the 700? 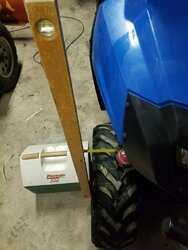 Several have had those welds break over the years. Some from hitting things...others claim to have been "just riding", though we know it's hard to get the truth sometimes. And they do have a rep for being a bit weak.
But...if it's staying put and looks ok, I don't think I'd worry about it too much.

I can tell you right now, after owning my 2nd 700, that the quality control on these is s***. My dump bed is probably an inch off center, and only one of the stops in the down position even contacts. The tape says it's simply not welded on straight. The latches were also not at all inline until I bent them. I wouldn't be surprised if your camber was always that far off. Remember when fit and finish used to be Honda's strong suit?
Last edited: Wednesday at 9:49 AM
Reactions: CID

We have have two beg red 250 three wheelers on our family farm property since they were new, very well put together as well as a rancher. The big reds only ever needed their starters rebuilt and a new key switch. Fit and finish perfect on them. my concern is if i do a 2" lift will this get worse?

The Most Unknown Member

What does the camber look like on the drivers side?

it is flush with a level up and down

The Most Unknown Member

Only one thing to do.